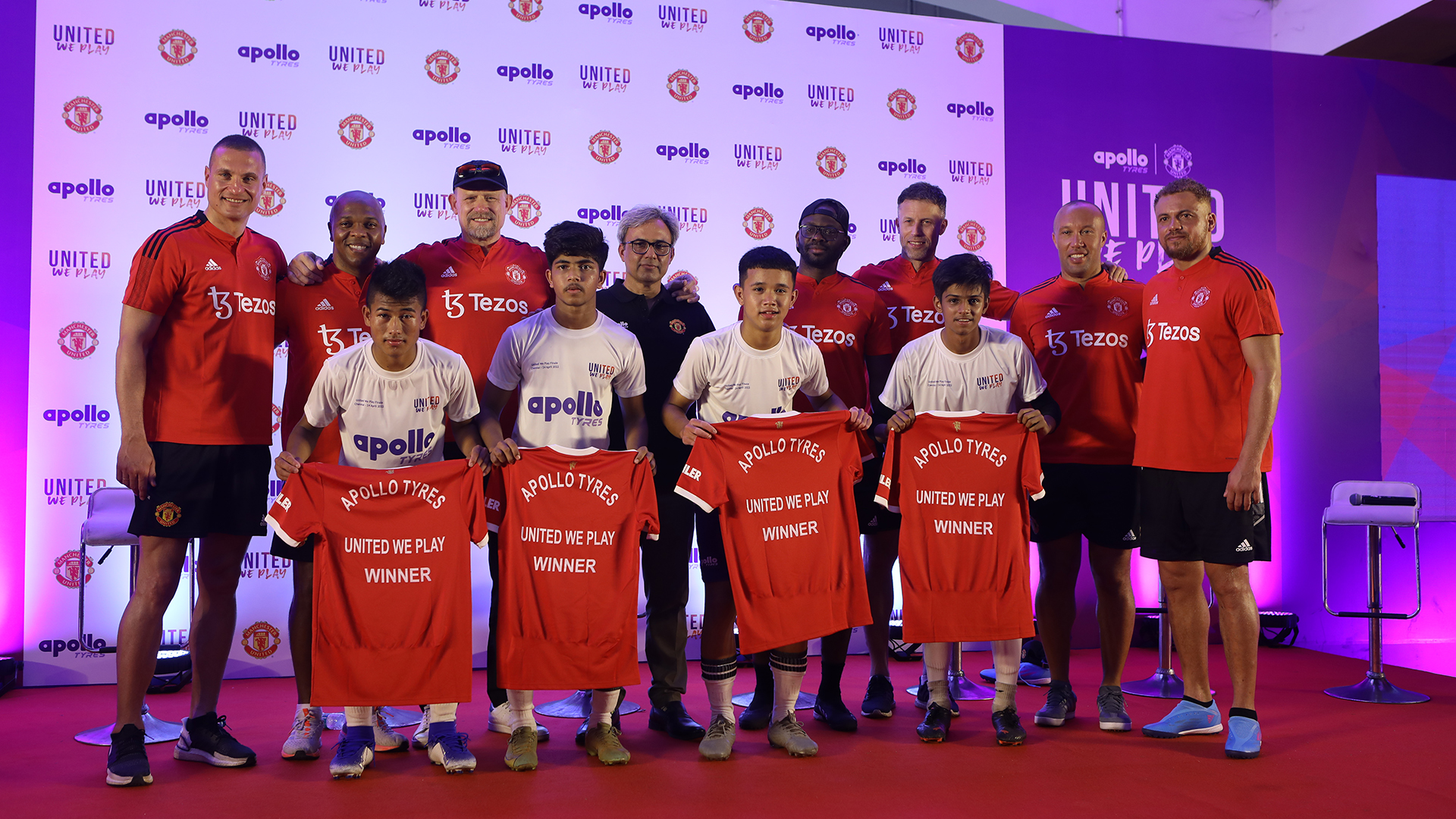 Four players chosen as winners of

Second season of United We Play by Apollo Tyres and Manchester United ends with a bang; 4 talented kids chosen as winners

⮚ The grand finale of United We Play 2.0 held in the presence of seven Manchester United Legends

April 25, 2022: Leading tyre maker Apollo Tyres announced the culmination of the second season of United We Play, the on-ground grassroots football competition, in association with Manchester United, at a grand finale in Chennai. The second season of the initiative saw an overwhelming response with participation of more than 5000 budding footballing talent from India; in the end, it was the sublime skills of four young footballers –Chennai’s RS Preyarhanjan, Federick Kurbah from Meghalaya, Chandigarh’s Ronald Singh and Kunal Yeole from Pune – that won the hearts of the judges and coaches. In attendance were seven of Manchester United’s biggest Legends - Peter Schmeichel, Nemanja Vidic, Mikael Silvestre, Louis Saha, Quinton Fortune, Wes Brown and Ronny Johnsen, who visited India as part of the United We Play Finale and were suitably impressed with the talent that they saw on the field.

United We Play is a pan-India initiative by Apollo Tyres and Manchester United to support young footballers in India by giving them a platform to showcase their skills with the objective of motivating aspiring footballers to continue playing, by engaging with them, and introducing them to global training methodologies. The second season of United We Play was launched earlier this year with a virtual interaction with Manchester United legend Dimitar Berbatov.

The four shortlisted players are being given a once in a lifetime opportunity to visit Old Trafford to participate in exciting activities like a matchday experience, training session with Manchester United Soccer School coaches, and legend interactions.

The second season of United We Play was conducted across 19 markets in India, in a hybrid format comprising 10 virtual workshops and Masterclasses across 12 markets, and an onground leg across 8 markets in two phases, reaching out to more than 5000 aspiring players. As part of United We Play, Indian coaches also underwent a development programme under the Manchester United Soccer School coaches, post which they conducted the first round of trials to shortlist the top players from each market. The second phase of trials was conducted by Manchester United Soccer School coaches, and the four winners were subsequently shortlisted in the presence of the Legends.

Victoria Timpson, CEO of Alliances and Partnerships, Manchester United, said, “Manchester United is proud of its longstanding partnership with Apollo and the continuous work they do to encourage football amongst aspiring young players in India. In its second successful year, the United We Play programme has reached more than five thousand players across India, giving them an opportunity to express their skills and love of the game.

“It is a delight to see so many talented young footballers participate in Apollo’s United We Play programme and on behalf of everyone at Manchester United I congratulate all the finalists and as well as the final four winners.”

Commenting on the finale, and the selection of young Indian footballing talent, Rajesh Dahiya, Vice President, Marketing, Sales and Service (India, SAARC & Oceania), Apollo Tyres Ltd, said “Our grassroots programme for the development of football, is showing some success, as we see good talent emerging from different parts of the country. This season, the selectors have had a tough time choosing the best four out of more than five thousand participants. While the selected ones will have the opportunity to engage with and learn from one of the most iconic clubs in the world, I would also like to compliment the extremely talented kids who couldn’t find a place in the final four.”

he theme for this edition of United We Play as envisioned by Apollo Tyres and Manchester United was ‘Access to Sports’ with the aim of creating access to global standards in player development and engaging the youth via sport even without access to open spaces. In addition to being the Global Tyre Partner of Manchester United Football Club, Apollo Tyres, in India, has a presence in Indian Super League (ISL), being the principal sponsor of Chennaiyin FC.